The Milford 5000, sponsored by Harcourts and Heartland Bank was held this year 2/3 February, catering for “junior” bowlers.

This season’s Milford 5000 marked its 10th anniversary in appropriate style and the tournament, founded in 2009 by former club members Graham Dorreen and Tim Preston, produced what arguably was its highest ever standard.

Originally the event was for one to five-year bowlers, but now may include one bowler at least with up to eight years’ experience, thus explaining the rise in standard.

Bowlers entered from centres as far afield as Bay of Plenty, Waikato and Northland, Counties plus local centres of Auckland and North Harbour. The winners of the first prize of $1500 included two who have already gained national recognition in Point Chevalier’s Aiden Takarua and Alex Reed, plus Colin Williams.

Best of the locals were Mairangi Bay’s Neil Buckner, Phil Chisholm and Theresa Rogers, who finished second, while the host club’s Ian McKenzie, Lyn and Rick Calver won the plate. Milford celebrated with another team gaining a place in the Plate, namely Gavin Hutton, Wayne Shields and Ross Ellery.

Also appropriately, Dorreen, now Bowls North Harbour board chairman, and Preston were on hand to present prizes and the cup named in their honour. 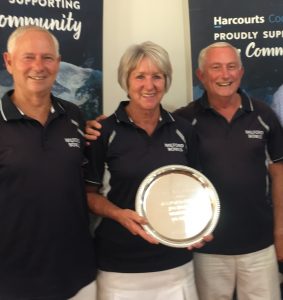 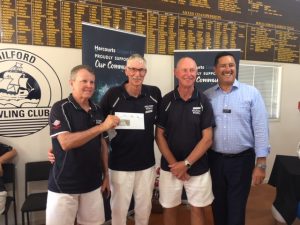