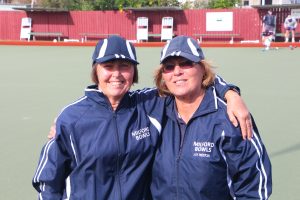 Thirteen teams from North Harbour clubs commenced playing in fog at Waimauku on Saturday morning in a sudden death format to decide the finalists to play off on Sunday at Helensville. Our team was successful against Beach Haven, Manly and Hobsonville, all in closely contested games. The other successful team to qualify through their group was the highly regarded pair from Orewa of Elaine McClintock and Lisa Parlane.

Sunday morning dawned with the threat of rain but at least dry to start the contest at 8:30. Orewa won the toss and their lead was holding shot about 200mm low in line at the change- over. Alwine played her first bowl and replaced the shot bowl with hers – game on!! One up to Milford after end one. However, the euphoria was soon extinguished as 4 then 1 then 4 shots were dropped by end four now down 9 to 1, ouch!

After a “you are better than that” from the side line, Joy proved it with her first close shot and our team went on to score 4, now down 9 to 5 after five ends. Our team was to secure the next 5 ends with four singles and one 3! The score line after 10 ends was 12 to 9 to Milford. At this point Orewa came back to the party with a single, before Milford regained their composure and secured another 3. Orewa came back with a pair on thirteen and for those watching the tension spiraled up with the score line 15 to 12 still with Milford. But our girls weren’t finished, a 3 and a 2 took them to 20 to 12 by fifteen, sighs of relief in the Milford camp, but then disaster struck! On sixteen Milford went down by the maximum of 6 shots, a few good bowls by Orewa but largely due to many wayward Milford bowls! Ironically, Kathy the Milford club president, had made the 45 minute trip after hearing that Milford were doing well and was just walking onto the venue to hear this ends result!

At 20 to 18 the tension on the side line spiraled out of sight! With another dropped shot on seventeen, Milford went into the last end at 20 to 19 but with the advantage of having the last bowl. No pressure! The Orewa lead played two beautiful bowls to have both within 300mm on each side of the jack. Then with her third bowl Joy played the bowl of the match, it rolled gently between the opposition shot bowls and took the jack to 500mm behind and with her bowl holding at 300mm to the right. The Orewa skip missed with two running shots before running her third between the jack and the shot bowl and into the ditch!!!! Joy leapt in the air, Alwine left her last bowl lying at her feet and it was joy all around.

Well done Milford 21 to 19 a great result that proves that “It is never over until it is over”. 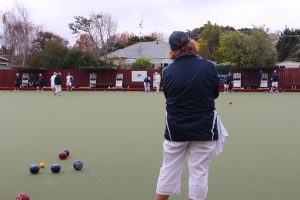 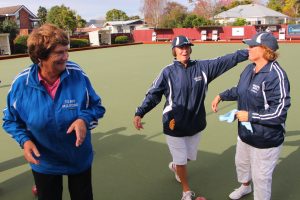 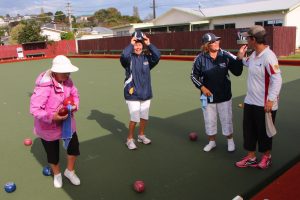